On average, people read two or more app reviews before installing an app

Today, the reviews and ratings of a product/service contribute a lot in the decision to purchase that particular service or not. For instance, we go through restaurant reviews before making a reservation, have a look at the movie ratings before buying the tickets and the same is the thing with mobile apps – we read their app reviews before installing the app.

These mobile app reviews are as they indirectly affect the visibility of the application in the respective app stores while also determining their chances of being featured on the home page. Currently, the majority of the app market share is covered by the Apple App Store and Google Play Store. 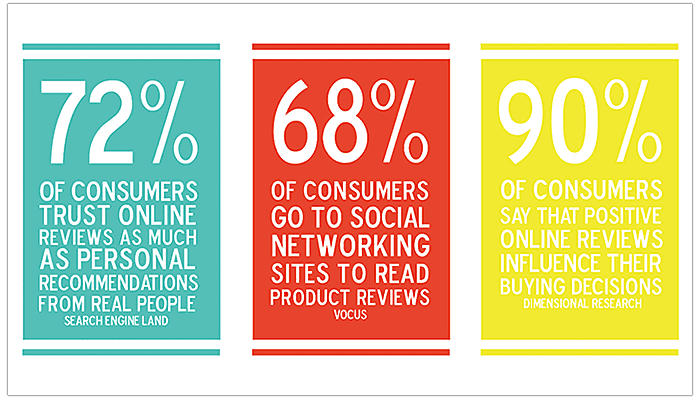 The above image shows some of the research statements made by companies including Vocus, Search Engine Land and Dimensional Research regarding the importance of online app reviews.

But today the whole scenario has changed a lot, the app stores have become crowded as hundreds of apps are being added in the app stores on a weekly basis. This has further turned app rankings into a challenge for app businesses to overcome, that’s why the app owners are encouraging their friends and family to give good app reviews as a last resort.

Now that we have provided you with a short backstory regarding mobile app reviews and their role in the world of mobile and web applications. Let’s have a look at some of the most important reasons why we need reviews for our apps. 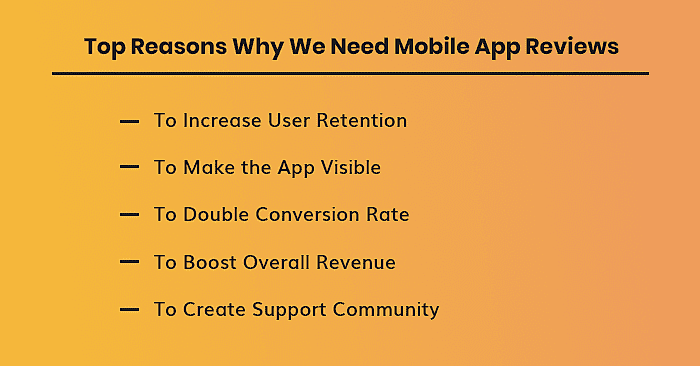 When you are asking users for their feedback regarding the app and its working, you are also encouraging two-way communication. That means users will be aware of the fact that their app reviews are being considered seriously to make changes in the app. On the other hand, it’s the app owner’s responsibility to show responsiveness by addressing the user’s concerns regarding the app.

This line of communication will certainly boost user engagement while encouraging positive app reviews that build help in building long-term loyalty to the brand.

One of the key things that can be termed as the ultimate aim for an app owner is to generate great revenue from the app. This goal can only be achieved by increasing the app’s visibility in front of the audience, so that more number of people are able to see the app.

To get four and five-star ratings, look for patterns in your app reviews. For example, is there a particular feature that is liked by the majority of your app users or there is a feature update that people are wanting in the next app version?

Another thing that you need to make sure is selecting the appropriate as well as relevant category and subcategory for the app in the app store to achieve high category ranking in the app store.

There’s no denying the fact that the app’s reviews and ratings have a major influence over the conversion rate of the app. But according to a few experts, once the level of quality is achieved by the app, this factor no longer seems to make a difference. Other than app reviews/ratings, elements like app title, app description, screenshots, demo video, app icon etc also affect the conversion rate. 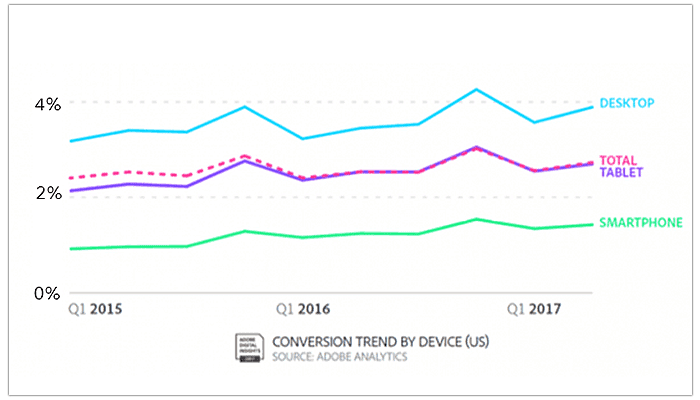 The above image shows the conversion trend on different devices including Desktop, Smartphone and Tablet. The graph shows that the visit conversion is almost three times higher on a desktop in comparison to the smartphone.

In other words, it can be said that the better the ratings and app reviews, the better are the conversion rates of that application. Thus, contributing to the likeness of the app to deliver satisfaction to the users through the app’s services.

The overall revenue of an app is indirectly related to the app reviews as well as ratings of the app because they act as a source of credibility for the user’s purchasing behavior. To obtain the maximum amount of app reviews, create different feedback channels in your app. For instance, one of the best times to ask for an app rating is when the user is after a user has successfully made an in-app purchase.

Also, provide your users the option to rate your app through different social media channels. For example, you can ask the app user to leave a feedback on the Facebook page of the app or rate the app’s performance on the promotional website of the application etc..

To build a community to support your app is an optional choice for the app developers dubai rather than a mandatory option. But in the case of gaming applications, these communities play a crucial role as they bring together people from all around the world who support the app.

A great tactic that can be used for motivating the custom to review is by rewarding them. With this trick, you can offer some virtual game currency or extra credits to the user for writing an app review.

So, these were the main reasons why mobile app reviews are so important for an app business to build a user base for the app, increase its overall revenue and boost the app’s visibility.

How to get your Mobile App Reviewed?

We are currently living in a fast-paced world where every day we encounter new technology updates. If you own an app and you want your app business to survive in this tough competition then you must get your web and mobile apps reviewed by a trusted and verified platform. 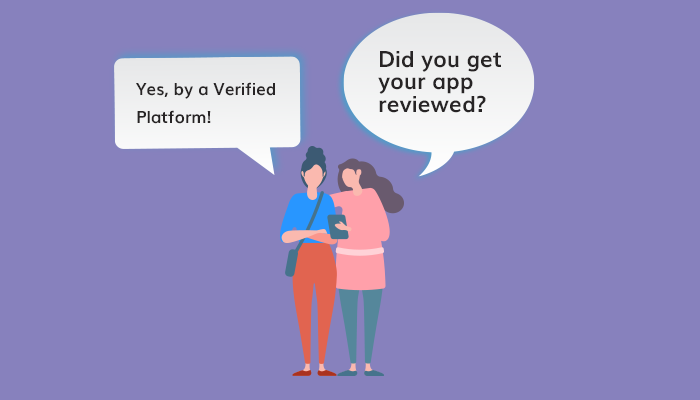 There are various designated app review websites out there that provide the services of informative and detailed app reviews for mobile as well as web applications. Here, the credibility of such websites and platforms plays a crucial role in providing the right exposure to the applications.

Our suggestion would be to only opt for those platforms which hold expertise in delivering app reviews by experts, as app reviews from such sources not only will add to your business credibility but also increase the visibility of your app in front of the relevant audience who might be your potential customers.

After going through the role of mobile app reviews in an online business and the reasons why we require app reviews by experts, it is safe to say that reviews not only directly impact the total number of app downloads but also affect other aspects which eventually are beneficial in the long run.

We, at Inlogic IT Solutions LLC, fully understand the industrial challenges to ensure the success of our mobile applications. Our app developers cater the latest mobile app development services dubai for all sorts of operating systems such as IOS, Android and window phones. In order to building innovative and scalable mobile apps our business analysts make a comprehensive research analysis on your business goals and requirements.